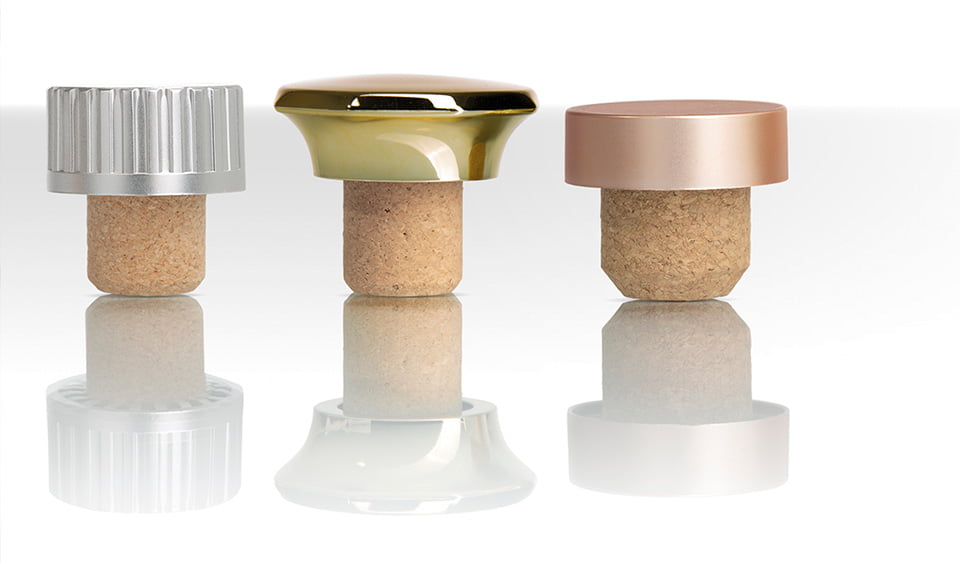 After more than a century of innovation in stopper solutions for the wine sector, Torrent Group recommends microgranulated and aluminium stoppers for sherry. Currently, we produce microgranulated cork stopper internally. These are manufactured by moulding which, in the case of finos and manzanillas, enables us to completely control the variables which are extremely important for their qualities. One is colour and the other, oxygen content.

In the other Jerez wines (Oloroso, Amontillado, Palo Cortado, Cream, Medium and Pedro Ximénez, amongst others), controlling this oxygen quantity is not so crucial. A good option is the bartop stopper.  This closure consists of a microgranulated body and a crown. This crown can be made with polymers, wood or other material. We recommend a bartop and microgranulated cork stopper because Jerez is usually consumed by the glass. Therefore, a bottle can last several days and it is best to use a stopper that seals well with a comfortable opening and closure.

Torrent Group also uses microgranulated cork stopper with Crianza wines. The use of aluminium screw caps is also currently a popular option due to its efficiency in vintage wines and sherries. Not forgetting of course good quality natural cork.

An important factor is that the Jerez Designation of Origin does not require the use of any particular type of closure for its wines.

The history of stoppers for sherry.

The Torrent Group began over a century ago to manufacture the first conical natural cork stoppers. In the 1940s, we produced cork bartop stoppers, which were opened by hand, and which then developed with the appearance of stoppers with a plastic, wooden or cork crown. The Jerez wineries started this because of the practicality it offered consumers.

Today, there are two closures commonly used with the Jerez Designation of Origin: the microgranulated cork stopper made by individual moulding and the aluminium stoppers that work really well with these wines.

At Torrent, and specifically with sherry, we recommend our microgranulated cork stopper. It has proven a success because it is made entirely in house and the manufacturing and production process in is sustainable.

The part of the stopper that is in contact with the wine is the most noticeable, given that it is responsible for maintaining the wine in good conditions. The crown, which we also manufacture, can be a very important added value for the product. A crown for a JSX wine is not the same as a crown for a VORS sherry, since the cost and design for each is completely different.

As we have stated, our microgranulated stopper guarantees: