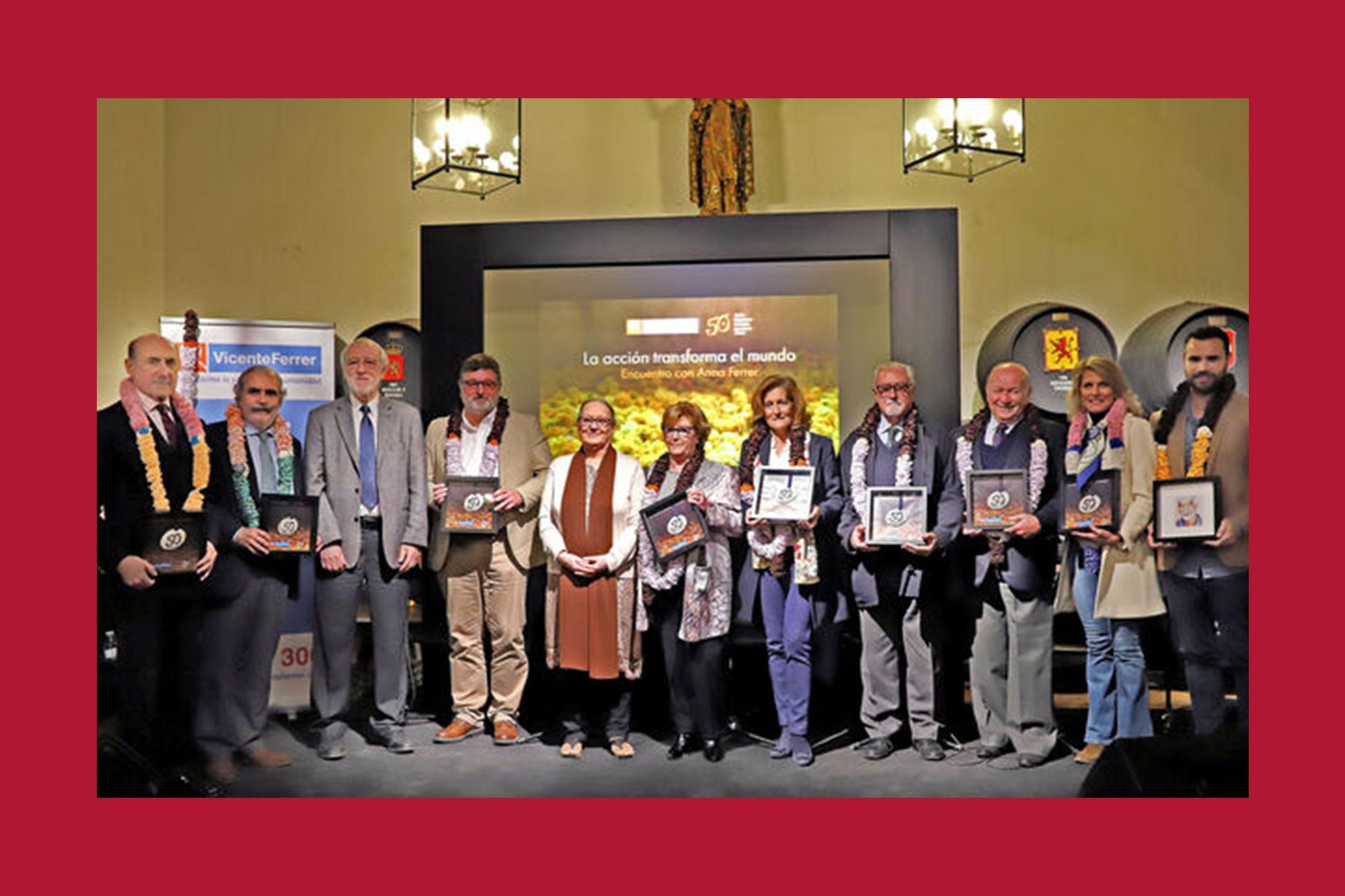 The Vicente Ferrer Foundation (FVF) held an emotional event last night at the Wine and Brandy Regulatory Board in Jerez, on the occasion of its 50th anniversary. The president of the FVF, Anna Ferrer, recalled the institution’s beginnings, objectives achieved and future challenges.

The event recognized the contributions of various organizations that in recent years have collaborated with the Foundation. In the case of the Torrent Group, our company in India, Alisha Torrent Closures (ATC), has been cooperating with the Foundation on different projects. Our colleague, José Manuel Jaén, picked up the commemorative plaque on behalf of David Torrent.

Below is some of the news from the event printed today in the Diario de Jerez newspaper:

Fifty years ago, Vicente Ferrer convinced three people to embark on a wonderful and complicated adventure. A mission rooted in a deep love for India, with the aim of transforming one of the most impoverished areas in the south of the country: the states of Andhra Pradesh and Telangana.

Fifty years later, Anna Ferrer captivated Jerez yesterday with her own account as a member of the Regulatory Board.. The San Ginés Winery at maximum capacity due to the great expectation that Vicente Ferrer’s wife caused in the city. The hall fell silent to listen to “the architect of impossible dreams” remembering the Foundation’s first steps, future challenges and importance of sponsorship; as well as transmitting, as Ferrer did 50 years ago, the power of each grain of sand to help change the world.

“I’m Ana. I’m a very simple person. In an interview I did in Madrid, they wrote that I had the gift of happiness. I don’t know if I have the gift of happiness, but I am a very spontaneous person, very happy and something I learned from Vicente: I’m always a positive person. I’m happy in Anantapur and here in Jerez with you.” These are the words of the president of the Foundation during the interview with the editor of the Diario de Jerez newspaper, Rafael Navas, during the event.

Anna recounted the beginnings of the Foundation, when she (a young 21-year-old journalist), Vicente Ferrer and two local collaborators arrived in Anantapur, “a desert” where there was extreme poverty. “The people now feel a great change in their lives, now they feel that they are the same and that no one is superior to them (caste),” Anna said.

“Vicente convinced us when many people did not believe that it was possible to eradicate poverty. Vicente had the ability to convey to hundreds of thousands of us, both in India and in Spain, that we each have a responsibility to help those who were suffering,” she added at the event after being introduced by Esteban Fernández.

When Vicente Ferrer passed away, the Foundation was working in 2000 villages; today it operates in 3,700 villages: “Our team in Anantapur is made up of about 2,500 people and they all belong there. We wanted local people and when joined they didn’t know anything about development, but we paid a lot of attention to staff training. That’s how today the local people, who didn’t know anything about development before, are very loyal the Foundation: they are very professional. When Vicente died, they did not stop working at all.”

For Anna Ferrer, one of the keys to the Foundation’s good health is “to believe in the people of the town. They are the architects of their own development. There must be a good relationship based on trust between the people of the villages and the organization, because we are not there to develop them. We are there to make them more organized, stronger, to give them the knowledge they need to have a decent life and to be masters of their own lives.”

Among the challenges of the future, Anna Ferrer referred particularly to the “fight against gender discrimination and the elimination of gender violence. Women have made great progress, but much remains to be done”.

The relationship of the Foundation with Jerez is based on many names and surnames. Among them, Francisco Valencia and Teresa Garrido, promoters of dozens of events to raise funds for the institution in India.

In 2017, on the occasion of a private sale promoted by marriage, Teresa said  “as long as God gives us a breath of life, we will continue.. Since he retired, Paco has been our leitmotif. We are so in love with this Foundation that we go out of our way for it.” Valencia passed away last April, but all his good work is still very present. Hence Anna’s reference to him at the event last night: “Tere and Paco are very good friends”.

The CEO of the Vicente Ferrer Foundation, Jordi Folgado, stressed that the objective is not to have a large volume of people to help, “but efficiency.”  He said that it was highly “satisfactory” to restore dignity to people: “there are no longer first- or second-rank poor people.”.

The Councillor for Equality, Young People and Diversity, Ana Hérica Ramos, admitted that “since I woke up this morning, the hope and emotion inspired in me has not gone away. Thank you very much for inspiring us.”. The delegate recalled that during the morning reception at the Town Hall, Folgado “told us that the most important thing in areas where we operate is the organization of the community, in which everyone has an important role. And he spoke of dignity, something that touched me deeply.”

After the interview, Anna Ferrer and Jordi Folgado presented different awards from the organization for “solidarity and commitment” to the institution. The Jerez Brandy Regulatory Board, González Byass, Álvaro Domecq Romero, Sebastián Romero, David Torrent and Concepción Fernández Asurmendi were prize-winners at this great gala.

“It’s my first time in Jerez but it won’t be the last”, the president admitted. The city certainly hopes so. Thanks, Anna.